At Langton's, it was a week for France’s Grand Dames, as well as homegrown icons gaining aristocratic new world reputations this week. Representing the new world is Vasse Felix’s flagship Heytesbury Chardonnay, which earned 98 points from both Ray Jordan and Huon Hooke, who waxed lyrical about its “…seamless and refined” palate, “with great line and delicacy, and prodigious length.

A great wine, an Australian Grand Cru”, he declared. We’d be inclined to agree. We expect our remaining stores to disappear shortly - don’t miss the chance to secure your allocation now.

From new world to old, this week saw two exciting features in the form of a top-up allocation of a Premier Cru Burgundy – the Domaine Faiveley Mercurey Clos de Myglands 1er Cru Monopole 2015 going for an astonishing $55, and the 2000 Chateau Latour drinking beautifully at this very moment. The former is a much-coveted favourite among our brokerage customers and has now sold out. While the latter earned a perfect score of 100 points from James Suckling.

All this in a week that also featured a sellout Langton’s Confidential Shiraz (not to worry – we’ve put together another offering of a later vintage for you), a unique red from Etna, and more.

Spoilt for choice indeed. Now onto the week that was.
See the full Wines of the Week here.

Vasse Felix’ flagship Chardonnay is cultivated from the most select parcels available for each vintage and, over the years, has come to be recognised as a bona fide Margaret River icon, a wine Huon Hooke awarded 98 points and hailed as “…an Australian grand cru. Outstanding.” We concur.

Though winter might seem to be the domain of the reds fans, those seeking a Chardonnay of restraint and elegance to enjoy over the winter months will be well served with the Flint Rock from Langton’s Classified producer Howard Park. Richly aromatic, with an intense, “flinty” texture, it makes for rewarding winter sipping and tremendous value all at once.

Our XXVII Confidential offering from a leading Barossa Valley, as Confidentials of these natures wont to do, sold out in record time. However, we’ve put together a 2012 vintage of the same Shiraz, with an extra Halliday point (bringing the total to 96) and a Value Star in tow for just $35 a bottle. Enough said.

“…the palate is rich, velvety and complete. A great portrait of a place in the context of an outstanding vintage.”
96 points and a Value Star, James Halliday

With a perfect score of 100 from both James Suckling and Wine Spectator, and many more following close behind, this release from Chateau Latour is an exercise in patience that will pay off in spades.

‘Latour has made truly great wines in the past two decades – and this is one of the best. It has fabulous aromas of black truffles, currants, raspberry and dried flowers. Mind-blowing on the palate, it’s an emotional and soulful red.’
100 points, James Suckling (2014)

From Alex Head, one of the most exciting winemakers out of the Barossa Valley in the past 10 years, comes this Stonewell Shiraz, named for the red and grey sand clays (blonde in colour) in which it’s grown.

“…just so seductive and so well done, it’s hard not to fall in love with the style… Succulent, balanced, and very long. Smell the velvet glove. Delightful.”
95 points, Gary Walsh

Shiraz may just be the consummate winter warmer - full of robust fruit and spice, they make for undeniably snug cold weather sipping. This dozen is full of fine examples from Hewitson, Geoff Merrill, Kilikanoon, and Two Hands, and beautifully showcases the subtle differences in style between McLaren Vale and the Barossa Valley. 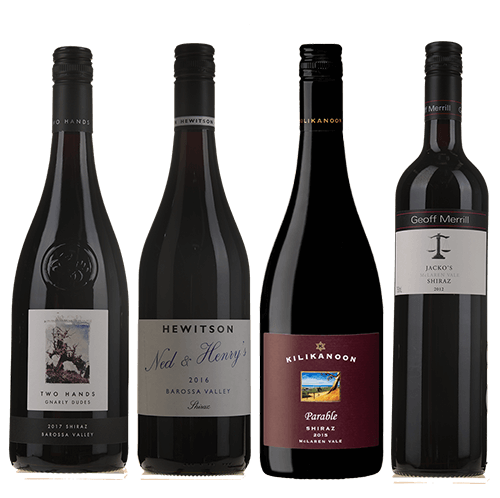 A week full-to-bursting, as you can see, and on a weekend that, for many of us, is long, one that offers plenty of opportunity for exploration.

It’s an ideal chance to take your time, find your way to wines you may not otherwise encounter, and use the occasion to expand your horizons - and your cellar - with new and exciting discoveries.

So explore our catalogue, dip your toe into the weekend’s auctions (quickly, as they close at 7pm on Sunday night), and savour the journey.